October 18, 2007
JICPA hosted the 17th Conference of the Confederation of Asian and Pacific Accountants (CAPA Osaka Conference) on October 3rd through 5th, 2007, at the Osaka International Convention Center as the main venue. The 28th JICPA Annual Conference was jointly held during the same period.
Over 500 people from CAPA member bodies, including about 200 delegates from China and about the same number from Korea, attended the conferences. We also welcomed participants from non-member jurisdictions such as Iran and Russia. Including participants from Japan, about two thousand people attended.
The main theme of the conferences was "How professional accountants can develop the Asian economy." At the opening ceremony on October 4th, JICPA was honored to welcome the Japanese Imperial Family. The special lecture was provided by Mr. Kunio Nakamura, chairman of the board of Matsushita Electric Industrial Co., Ltd. The main theme was discussed by the presidents of each of the professional bodies of Japan, China, Korea and India, including the president of IFAC, during the panel discussion. Fifteen concurrent sessions were held over two days, and the conferences closed successfully on October 5th. 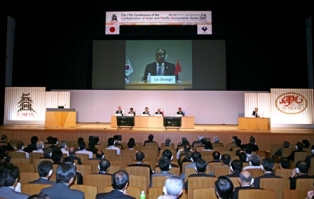 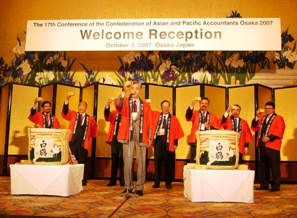